Too Good to Last

I woke this morning in the dark (not early, about 6.30am) to silence save for the occasional vehicle going past. The slush of the tyres indicated that they were driving on wet roads but I couldn’t here anything else. At least it’s not raining I thought as I lay in bed contemplating getting up. It was only half an hour later, when I opened the curtains that I realized it was not raining, it was snowing. Snowing pretty heavily too with huge snowflakes blanketing everything in a fluffy white decoration.

The weather here over the past week was indeed too good to last. Although the mornings have been cold, the days have been sunny with comfortable shirtsleeve temperatures.

The Summit Nature Photography Workshop finished with a great final dinner on Friday night. Great fellowship, group photos and swapping of contact details. I seem to recall the Silver Dollar Bar and the Mid Town Tavern featured in the post dinner celebrations.

The next few days (apart from catching up on much needed sleep) have been spent exploring the surrounds of Jackson Hole and Grand Teton National Park, expertly guided by Richard and Linda Barnes who are from Texas. It has been fascinating to discover how much Texans and Queenslanders have in common (and no it is not our red necks).

We were excited to get our first viewing of a bull moose prowling the fringes of a pine forest, keeping a very close eye on a small group of females. In the same area, along Moose Wilson Road, we caught sight of a Great Grey Owl perched in a tree near the road. The encounter was brief as a passing car spooked him (or her) causing it to fly off.

A bit too close, on a blind corner

With a gloomy weather forecast, I set off on Wednesday morning towards Jackson Lake Lodge, a beautiful old world style lodge with spectacular views of Jackson Lake and the Teton Ranges (which were covered in cloud most of the time I was there).

The next morning I came out to find my car covered once again with fresh snow. It reminded me very much of my younger days in Glen Innes where scraping ice off the car windscreen was a common practice.

Sylvan Pass in Yellowstone National Park was my major objective for the day, situated 8,524 feet above sea level, it had been closed the day before due to snow and ice. It stood as a potential barrier to my trip over to Cody. The two hour drive from Jackson Lake was reasonably uneventful in spite of the constant and sometimes heavy snow falling. My arrival at the Pass seemed to coincide with even heavier snow falling but the road seemed OK. The occasional on-coming car gave me some hope that the pass was still open.

As I approached the top of the pass, I became aware of a truck with flashing yellow lights some way in the distance, traveling in the same direction as I was. It was a snow plough. Beauty, with a degree of relief, I was able to tuck in a couple of hundred metres behind him and follow him all the way to the bottom.

I don’t know if they closed the road behind me but I was through and that is all that mattered. I did get some glimpses of wild life on the way but conditions were not conducive to stopping to get a picture or two.

So I’m in Cody (of Buffalo Bill Cody fame) for the next 2 days, then it’s back into Yellowstone, with a much improved forecast, for some more wildlife encounters. 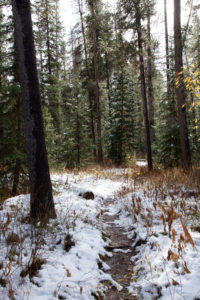 There has to be a bear in here somewhere!!

View all posts by: David Mackenzie